"This is probably the finest Christmas album I’ve listened to for a long, long time!" Robin Mark 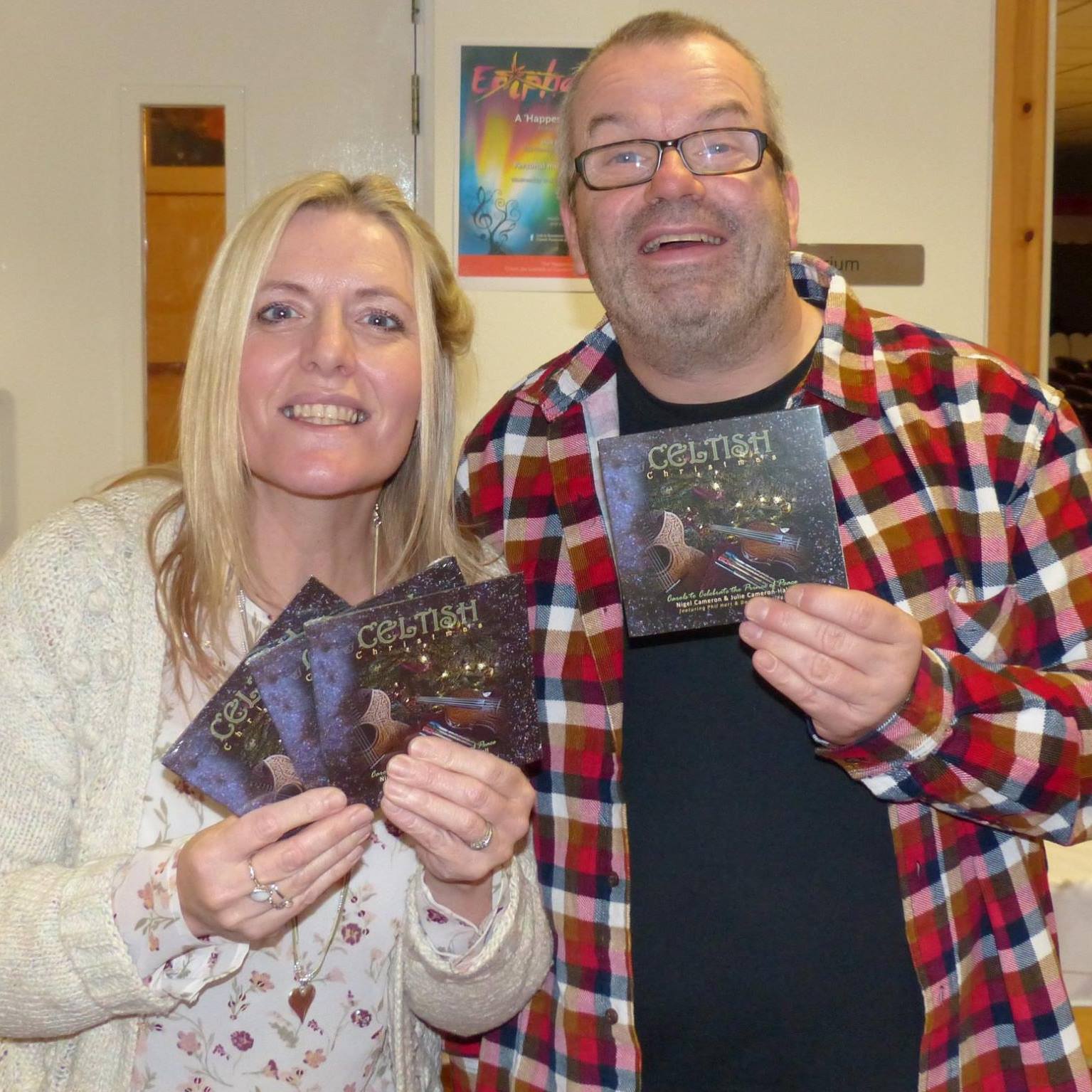 'CELTISH CHRISTMAS' is the first vocal album we have made together and is the fifth project to be recorded under our  'Sounds of Wonder' record label.

Traditional Christmas carols are given the full Celtic treatment with some new and alternative melodies thrown in to enhance the timeless poetry.

Guest musicians Dave Bainbridge and Phil Hart add their talents to join in celebration of the Prince of Peace who 'came on earth to end all strife'.

"This is probably the finest Christmas album I’ve listened to for a long, long time!"

As befits their name, Celtish have fused Celtic instrumentation and melodies into many of the favourite Christmas Carols that we all know and love. The result, given the incredible musicianship and arrangements on the project, is a wonderfully pleasing album that captures the sound of the season completely and should be the background to everyone’s Christmas this year!.

The musicianship is first class, not only from Nigel and Julie themselves, but also from the array of world class guest musicians like Dave Bainbridge, Terl Bryant and Phil Hart who have contributed to it. And the recording and mix is absolutely excellent.

It is rare, I think, these days, to find a seasonal album that is nothing more than a few old recordings cobbled together for a quick sale at Christmas. Not so here. This is undoubtedly a carefully and lovingly prepared and executed work of art with original ideas and beautiful music and mix.

The final track on the album is a little diversion for the team that may not be appreciated by everyone, but it underscores the family aspect of Christmas-time, so we can easily forgive that small indulgence

Reviewing a Christmas-themed album in the first few months of the new year is an interesting exercise (unavoidable in this case) but the blessing of it is that time allows the listener to be somewhat removed from any mad whirl of expectation, rushing around, glitz or hype; therefore able to consider the merits of the album in the cold-light-of-day, in a way. This has been a delight as this is a glorious fusion of Celtic, folk and even yiddish sounds. Sometimes the best music takes you to another place and hints at different horizons. This one does.

It is Celtic in the wider sense; the album has timeless, middle-eastern, Hebrew, Messianic points of reference and, in several places, the collection sounds like Helen Shapiro-Messianic worship. Great vocals, marvellous musicianship, delightful arrangements and an interesting choice of familiar and lesser-known carols make for a sparkling collection.

With the market full of Christmas-themed albums, this was clearly something the ensemble wanted to do - felt it was right to do. Husband and wife Nigel Cameron and Julie Cameron-Hall are joined by a stellar line-up, including Dave Bainbridge. Amazing sounds come from a variety of instruments including mandolins, penny whistles and Uilleann pipes.

"Away In A Manger" features almost a call-and-response between the parts, at the end. "O Little Town Of Bethlehem" sees a key-change coincide with the advent of Nigel's uplifting vocal and they make it all seem so effortless. Even the final track, including the sound of carol singing from Northern Ireland in the early-'70s, captured on a primitive tape-recorder, is fascinating.

Sublime sound, sublime vision - my only disappointment is that "Hark The Herald Angels Sing" is only featured as an instrumental and then, only for a few seconds. Perhaps it was just one arrangement too far!

Tony: Now as it's turned out, your best-selling project so far is the 'Celtish Christmas' album released last year and still selling. How did it come about?

Julie: We got a collection of our most favourite and meaningful Christmas songs. With some of them, we took lyrics and put them to the old Irish tunes, just to bring a freshness. We did 'O Little Town Of Bethlehem' to the tune of 'Star Of The County Down', and it fits perfectly. We realised there was a theme coming through. Often, when you choose to celebrate something, God reveals some aspect of the season to you that you wouldn't otherwise have experienced. For us, on the Christmas album, it was all about the Prince of Peace and how he is able to cause wars to cease. He's the only God who can intervene in human affairs, cause wars to cease and completely change the human condition. We found some really powerful hymns.

Nigel: We discovered that one, 'It Came Upon A Midnight Clear'.

Julie: Oh my goodness! "Angels bending near the earth."

Nigel: We weren't that fussed on the original tune, but the lyrics - that line, "Man at war with man hears not the love song which they bring. So hush the noise, you men of strife, and hear the angels sing." We thought, 'We've got to do something with that!' Doing "Star Of The County Down" to a Christmas carol, what we started to realise was people do love the original melodies, so on a Christmas album we're going to have to weave in enough of the original melodies that makes it Christmassy. But we discovered there's a real power in singing these lyrics to a different melody, because it's so automatic every Christmas. We made some happy accidents; we call them Jehovah's sneaky moments. For example, a friend of ours, Phil Hart, who's a beautiful guitar player, sent us a demo of a couple of folk tunes he'd been recording.

Julie: He called them demos, but we were saying, 'There's no way those are demos: they're absolutely beautiful. Can we add lyrics to them even though you intended them to be instrumental?' He said, 'Go for it.' And he's become part of our Celtish group now whenever we travel.

Tony: 'Celtish Christmas' also has an ancient recording at the end of it?

Julie: Nigel had got these really old, crackly recordings on his first tape-player, in the early '70s, of his family singing carols.

Nigel: It was a C7 cassette that came with the tape-recorder.

Julie: I had a recording, on a reel-to-reel, of my grandpa, in the early '60s, singing this old folk song about a robin hopping through the window at Christmastime. We were looking at each other, 'Can we make something beautiful out of these recordings, and add them as a bonus track at the end of the album as a tribute to the people who have made us who we are?'

Nigel: I remembered when I played Chris Smith this reference. Phil Keaggy, on an album called 'Way Back Home', uncovered a recording of his great-grandfather singing, before Phil was even born. He incorporated it in this beautiful piece of guitar music that celebrated his family. I remember in the '90s, when I heard that, being really moved by it. When we started to realise we both had these treasured recordings - really beautiful, but really scratchy - we thought we could do something similar.

Julie: It's a little gem at the end. It's not part of the album - it's a bonus - but it's kind of important. Honouring where you've come from is a really important thing that we forget. Christmas is a time where you remember people who are not there anymore. CR

Tony Cummings is the music editor for

Our new single is a fantastic 'radio edit' version of the foot-stomping 'See, Amid the Winter's Snow'' with excerpts from two other carols played on whistle, fiddle and mandolin.