inspired at home during lockdown 2020

"One of the greatest Celtic-flavoured projects ever... A captivating album... which deserves to be heard by the worldwide worshipping church." 5/5 Premier Christianity

on a number of songs, also a huge musical contribution from fingerstyle guitarist Phil Hart on his beautiful Lowden guitar and Epiphany who provide a string arrangement for one of the songs.

OUT NOW ON CD: 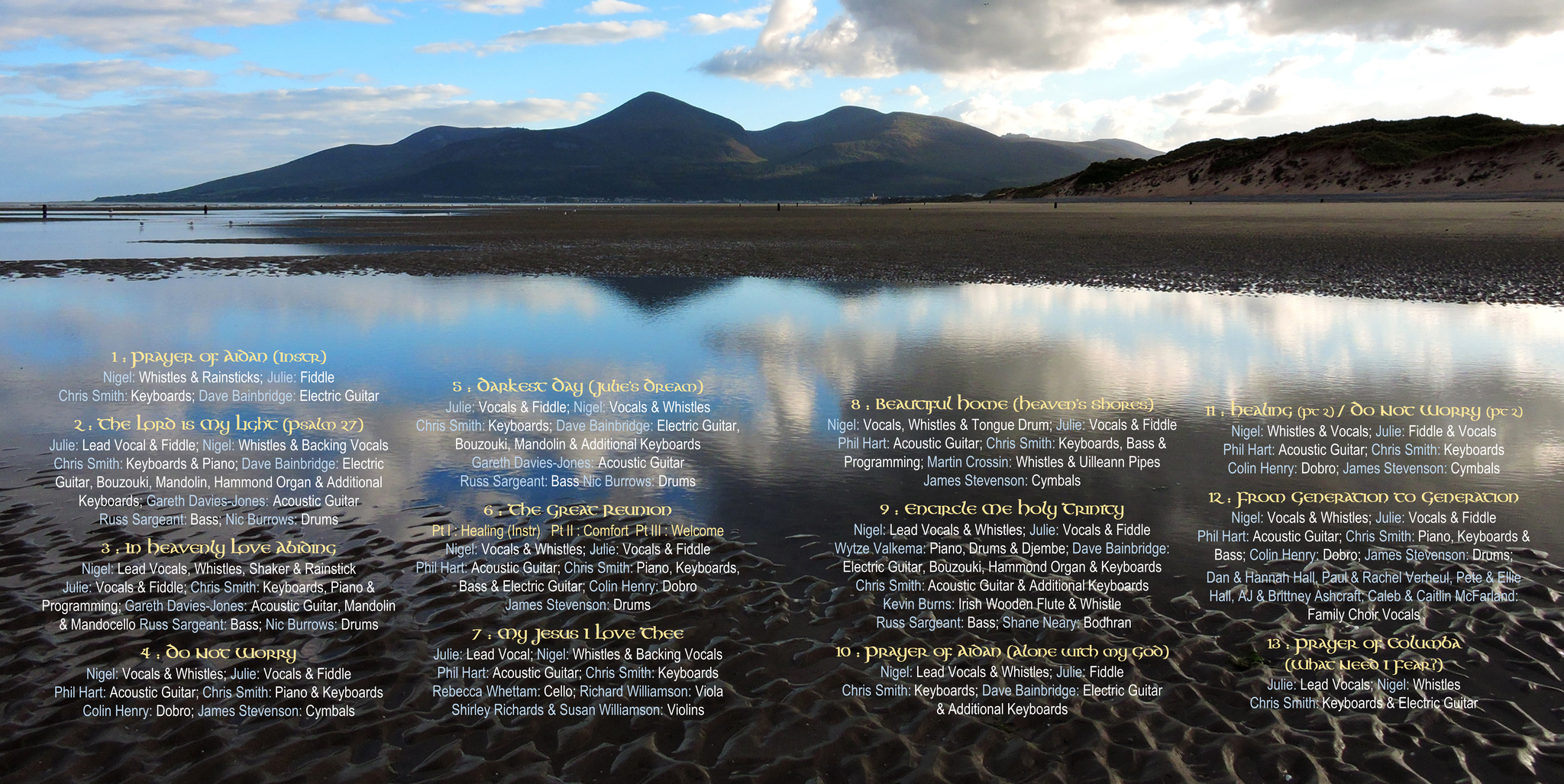 Those who've been following the ministry of singer/fiddle player Julie and singer, flute and whistle player Nigel will already know that in the whole sweep of music labelled "Celtic" both by Christians and non-Christians, no one plays it better. The husband and wife duo's previous three albums have been a preparation for this, their masterwork, and if you have any interest in music inspired by the Irish folk tradition or keen to explore deeper the divine mysteries of true worship, this beautiful album of meditative music is unreservedly recommended. The Camerons have brought in superbly gifted guests to help frame their songs - Phil Hart's acoustic guitar nuances bring out the haunting melodies some of which he's written or arranged and Iona's Dave Bainbridge offers multi-textured soundscapes through his keys, electric guitar, bouzouki and mandolin. Throughout, Julie's vocals are transcendentally emotive and when she's singing "The Lord Is My Light" with lyrics by Nigel adapted from Psalm 27, set to the haunting traditional Irish melody known as "Women Of Ireland", or "My Jesus I Love Three" with lyrics written in the 19th century by an impossibly young William Ralph Featherstone, the effect is spine-tingling. But the absolute classic is "Darkest Day (Julie's Dream)" with words inspired by a dream Julie had of children in Heaven. This sumptuous album also has beautiful artwork which could do with a vinyl release to show it in all its glory. But as you may well have to wait another year for a vinyl release of 'Celtish Home' I suggest you stream or buy the CD of this wonderful meditative worship set now. It will likely help you find deep places with our Lord and King.  (Tony Cummings)

Considered to be a Father of the modern worship movement. Writer of songs “Here I am Wholly Available” and “Jesus shall take the highest honour”

Worship-leader from Nigel's 'HOME' town of Belfast. Writer of songs like 'These are the Days of Elijah' and 'Jesus All for Jesus'

Although all our concerts and events were cancelled during lockdown, and much of our income stopped, we have both felt blessed by the gift of time for creativity and the inspiration came for a new season of songwriting. Very soon the themes and shape of a new album concept merged, and we are excited to announce the title of this new project as ‘Celtish Home’.

Through some miraculous and timely provision, we were able to start recording in July and since then have felt an urgency and acceleration in the creative process, confirming to us that God had opened this door and His Holy Spirit is guiding, inspiring and preparing the way for this music to be released.

Here is a summary of some of the key songs and themes for this album:

Nigel was drawn to this Psalm quite early on during lockdown and set it to a beautiful Celtic melody called ‘Women of Ireland’. The words of the psalm seem more relevant than ever when we all need to know that “The Lord is the stronghold of my life—So why should I even be afraid?”. Then we couldn’t resist doing something joyful and rhythmic with the powerful declaration “I will sing and make music to the Lord with shouts of joy. In this land I will see the goodness of the Lord.”

For some time now we have felt burdened to speak into the issue of the sanctity of life and the rights of the unborn but also to bring comfort and healing to those who have lost children through abortion or miscarriage.  Quite some time ago Julie had a very vivid dream where she was in heaven with a group of enthusiastic young children who were asking her if she knew their mommies. It was clear in the dream that these were children who had never been born but they wanted to sing a blessing for their parents. We have told the story of this dream in a song which we pray will bring hope and healing to those affected by the issue but will also be a powerful cry for justice for the unborn. “He who formed them in the secret place. He can see them through the darkest day.”

We have had another wonderful opportunity to collaborate with fingerstyle guitarist Phil Hart from Belfast. For a few years now he has been working on some new instrumental compositions but was more than willing to explore the idea that lyrics could be added to some of his beautiful music. Nigel has taken several scripture passages on the theme of heaven and weaved them with Phil’s melodies, so successfully, that when Phil heard the lyrics sung to his music for the first time, he was moved to tears. It just seemed like this was a divinely inspired collaboration!  Following on from the ‘Darkest Day’ song with instrumental passages, Parts I-III of ‘Great Reunion’ that we have called ‘Healing’, ‘Hope’ and ‘Home’, we believe this sequence will be very powerful indeed.

On our last album ‘Celtish Devotion’ we honoured the stories of two Celtic Saints, Brendan & Patrick. For this new project we were inspired by prayers attributed to Aidan of Lindisfarne and Columba of Iona.

Julie has written a beautifully haunting melody for the Prayer of Aidan and Nigel has cleverly set the Prayer of Columba to the traditional hymn tune St. Columba.  A recurring theme from these early Celtic Christians is the practice of solitude, yet we learn that each were called from their solitude to plant thriving communities in turn impacting many nations with the gospel. These stories seem more relevant than ever as we all seek to emerge from what felt like a period of solitude.

There will also be some traditional hymns on the album which will have the full ‘Celtish’ treatment, including ‘In Heavenly Love Abiding’ set to the Irish ballad ‘Raglan Road’; ‘My Jesus I Love Thee’ to the beautiful folk melody ‘The Meeting of the Waters’ and  ‘Beautiful Home’ set to a melody by Phil Hart.